The Found and the Made – Home 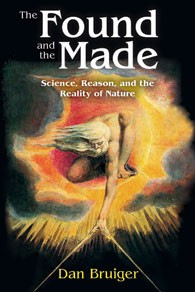 The Found and the Made:
Science, Reason, and the Reality of Nature

Published and distributed by:
Transaction Publishers, Publisher of Record in International Social Science

Welcome to my new book on philosophy of science. This book critically examines how mathematical modeling shapes and limits a scientific approach to the natural world and how it affects society’s views of nature. It questions concepts such as determinism, reversibility, equilibrium, and the isolated system. It challenges the view of physical reality as passive and inert, arguing that if nature is real it must transcend human representations. In particular, nature can be expected to self-organize in ways that elude a mechanist treatment.

This interdisciplinary study addresses several key areas: the “crisis” in modern physics and cosmology; the limits and historical, psychological, religious, and gendered roots of mechanistic thought; and the mutual effects of the scientific worldview upon society’s relationship to nature. It demonstrates that there is still little place outside biology for systems that actively self-organize or self-define. Instead of appealing to “multiverses” to resolve the mysteries of fine-tuning, cosmologists should look toward self-organizing processes on the cosmic scale. The book argues that physics is hampered by its external focus and should become more self-reflective. If scientific understanding can go beyond a stance of prediction and control, it could lead to a relationship with nature more amenable to survival.

The Found and the Made fills a void between popular science writing and philosophy. It will appeal to naturalists, environmentalists, science buffs, professionals, and students of cultural history, evolutionary psychology, gender studies, and philosophy of mind. Continue reading below for a sample from the introductory chapter:

“The next generation of physicists may well produce a set of equations to fit neatly on a T-shirt, claiming they represent a complete and final “theory of everything.” This book will show you why no such theory will ever definitively capture the depth of physical reality, let alone tell us how to relate wisely to the natural world. The reason is simple: the very hallmark of natural reality is that it cannot be neatly reduced to concepts or equations. There is an unbridgeable chasm between reality and thought, between the found and the made, between natural phenomena and their mathematical models. This is the same categorical gulf that has long plagued the relationship between the physical and the mental.

If nature is real, it cannot be completely mapped in thought, words, equations, or other idealizations. It cannot be assimilated to human purposes without skewing our relationship to it. While scientific models and other human creations are simple and well defined in principle, the natural world may be indefinitely complex and inevitably ambiguous. If so, there can be no complete expression for the world simpler than the world itself. There is no barcode for nature, no formula for the world, and no realistic hope to stand apart, even conceptually, from the universe that produced us and continues to enfold us. Yet, this is not an essentially negative conclusion. For the best hope of humanity, and even for science, is to outgrow a deep-seated denial of nature’s fundamental autonomy.

Modern science is haunted by the same ambiguity that has always permeated human consciousness: the ambiguity between internal images and real external things. Despite its self-assured pronouncements, science is plagued by similar questions of the proper relationship between the knowing subject and the objects of knowledge. This book reveals how and why it substitutes its own constructs for natural realities, shaping our relationship to the natural world while limiting the scientific enterprise itself. Like the civilization to which it belongs, science attempts to reconstruct nature with a humanized face. It treats the natural world as a matter of its own definitions, as comprised of simple idealized mathematical models, or as reducible to the parts of a conceptual machine.

The mechanist vision produced the industrial revolution, the miracle of technology, and the modern globalist economy, but at the cost of denying immanent reality to nature itself. Far from passé, it has grown more subtly entrenched in the computer age. Yet, it fails when considering the natural world as a complex whole, a universe capable of producing life. Like the civilization behind it, science has reached an impasse by following a one-sided approach to the natural world as something to probe, to use, to corral in thought, to reconstruct through technology. Slowly we are realizing that we must embrace a different attitude if we are to survive: we must grasp that nature contains and defines us, not the other way around. This book is about this impasse and the parallel attitude that science too must embrace, if it is to continue to serve humanity.

The challenge posed by modern cosmology is not only that the universe as a whole presents a unique object of study. What applies to the whole should apply as well to the part. Yet, methods of study often ignore the connections of part to whole, and usually ignore the role of the scientist in indentifying and interpreting those parts and connections. Physics in particular is still colored by a mechanistic vision of matter, dominated by outmoded concepts such as determinism, reversibility, equilibrium, and the isolated system. To embrace the whole, through a more organic metaphor, requires that physics outgrow its one-way relationship to physical reality, based on a straightforward, un-reflexive description of objects. It must become a “second-order” science, capable of embracing its own subjectivity by reflecting upon itself. It must restore a reciprocal relationship with the natural world—and also with the concerns of ordinary people who look to it not only for the latest technology but also for guidance as a secular myth. We have more technical knowledge than at any time in history, but hardly more understanding, let alone wisdom.”

Buy The Found and the Made